The working world is changing... What about unions?

In 2017, Unions 21 released a trend report for unions which outlined how the labour market would change in the next five years, even accounting for Brexit.

The ‘Changing World of Work’ written for us by NIESR, discussed how the UK labour market is evolving with trends that have been reshaping the UK for many years and, bar seismic change, would continue to do so. This is because, the factors underpinning the changes are aspects such as demographics, technology as well as other considerations such as 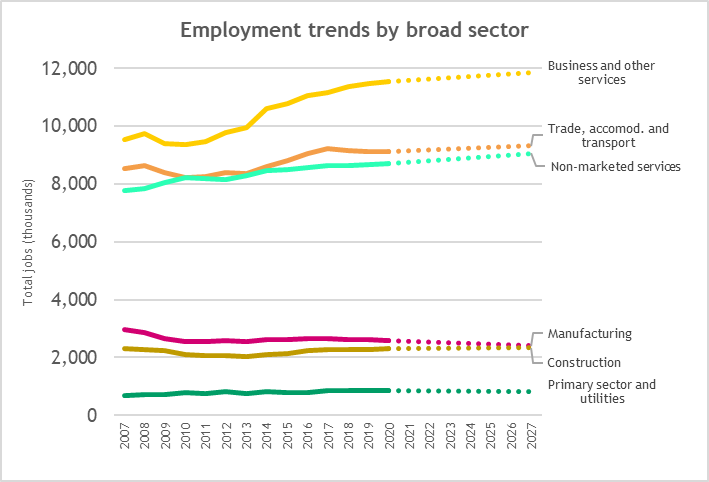 Our analysis highlighted the continued trend in occupations which saw the polarisation of the labour market with increases in both higher and lower skilled roles with reductions in the medium skills roles.

It also highlighted three industries that were due to grow:

There was also high absolute growth and three areas ‘to watch (health and social work, information technology and computer programming).

Four years on, were we right and what does the future hold?

The forecasts were largely right but there has been some interesting divergency. For example, in retail we predicted growth, but not in shop floor jobs which would see a decline. The growth would be in other jobs such as distribution and white collar jobs. We cautioned that automation could affect these numbers and indeed, it looks like it has. Food and beverage growth was actually higher than predicted but was depressed by the pandemic. 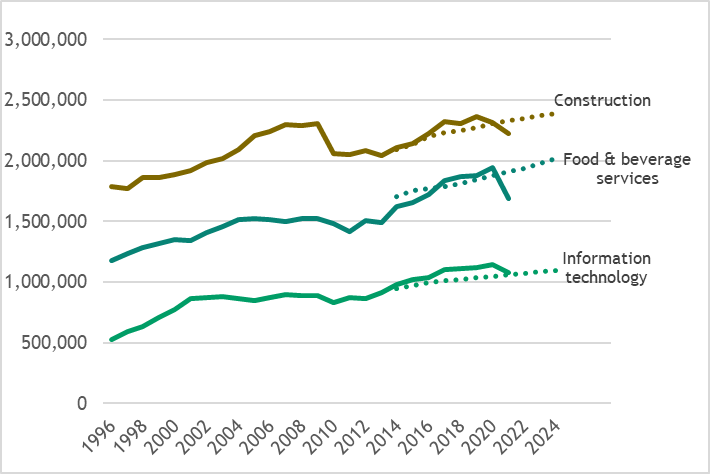 The most surprising development was that there was a downturn in information technology jobs. Breaking down this broad sector into its component parts reveals that, in fact, growth in “Computer programming” jobs, which had been particularly fast in the 1990s and again after 2010, in fact levelled off from around 2018 and contracted quite sharply in 2020-21. Both these developments are curious and may merit further investigation.

It should be reiterated, however, that “computer programming” remains a relatively high employment sector and, even after this recent stalling and reversal of jobs growth, has created more additional jobs over the past two decades than almost any other sector in the economy. But this offers a useful reminder that what we think we can observe around us or on an anecdotal basis may not always be a good guide to significant and large scale economic and industrial trends.

What will be in our latest report? Sign up here to join the launch.

Help us shape the unions of tomorrow